followed by thousands of people. A marvellous concert for all those in- and outside! 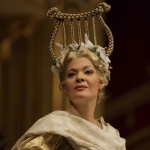 The interpretation of Il Viaggio a Reims at the Teatro alla Scala di Milano with the leading role, Corinna, has so far been the climax of her career.

Since his operatic debut, Cristina Obregón, worked under the direction of directors of the likes of: R. Bonynge, S. Cambreling, J. L. López Cobos, B. Billy, P. Schneider, J. Pons, D. Callegari, Harry Christophers, Victor Pablo Perez, Stefan A. Reck, among others, and develops further since then, a regular concerts and recitals in various national and international audiences.

Permanent link to this article: https://cristinaobregon.com/en/